Where do we go now?  What are the next steps in the battle against methamphetamine?  While there has been notable progress, there is still much to do. We will be convening our meth work group to assess future goals. If anyone would like to be a part of these efforts please contact the Restorative Justice office.  Community involvement is vital.

When working with meth we often focus on the negative.  Once becoming addicted to meth it is difficult to stop and is often impossible to do alone.  Meth addiction is tough to conquer and there may be relapse. These people will need support throughout the treatment process. There are people making a difference and overcoming meth addiction. The following is the testimony of a woman that had the courage to battle meth head on. It addresses the struggles and success that comes with recovery and healing.

Hello everyone. I’m going to tell you all about my path with addiction and recovery. This is not an easy story for me to share with you all. I’m very ashamed at some of the things I’m about to tell you.

I come from a good family. My father was absent due to his struggle with alcoholism. When I was a young teenager I had tendencies to party a lot more than other kids. This spilled over to adulthood.  I worked hard, sometimes I had two jobs to care for my kids and make sure they had everything they needed or to go on vacation. I was very proud of this.

On the weekends when I did go out I drank more than most women and found myself at after parties. This is where I first tried meth. And I liked it. I didn’t take it home; I didn’t do it again or seek it out in way. A year later the same thing happened. This time I was at a hotel with some girlfriends for the weekend. Most of whom are hardworking family women like myself. There was meth there that night. This said to me that it was okay because these women were just using it recreationally they were not junkies! It must not be as bad as I’ve heard.  IT got out of hand very fast and I was scared so I moved away and started a new life as a single parent this time. I stayed sober for four years.

At work one day I hurt my back. I was in a lot of pain so I missed a lot of work. I found out I had scoliosis with bulging and herniated disks. I got severely depressed and I stopped working. I started drinking more often, which is when I was reintroduced to meth. It was the answer to all my problems, my depression seemed to be miraculously lifted from me. I could finally get up and get treatment for my back. I was prescribed an anti-depressant and medication for pain. I thought FINALLY, THANK GOD things are getting better.

Very quickly I wanted more and when I didn’t have any my depression set in deep and I felt suicidal, like everyone would be better off if I was gone so they wouldn’t have to worry anymore. I lost my car, my apartment and everything I had. I stole the things I needed and was charged with things I don’t remember doing. I got in fights and was in and out of jail. At 39 years old, I found myself with a criminal record.

I started doing things to make sure people didn’t think I was using. Like making sure I slept and ate everyday so I never looked messed up or too thin, I never looked like some pictures you will see here today.   One day I went to a house I had I been to before and saw a friend of mine there who was higher than I’d ever seen anyone in my life. When everyone else was leaving he asked me to stay because he was afraid. Forty minutes later I was breaking into the bathroom when he would not come out. I had to pull him out and saw he had clearly overdosed. He was not breathing. I tried CPR but it didn’t work so I ran for help, there was no working phone and I did not think to call 911 since my phone was disconnected. When the neighbors came I went and hid. I was so afraid, more than I’d ever been in my life. He had died and I knew it. When they found me, I had a warrant so they took me to jail.

I sat there for quite a while and eventually was charged with possession of methamphetamine. Drug and alcohol court was my out of prison. I very quickly failed at this despite all that had happened and how much I loved my kids. This drug had taken everything I ever was and brought me to my knees. So, I went back to jail.  This time when I got out I went to my first A.A meeting. I only went because Drug and Alcohol Court made me go plus they had put an ankle monitor on me. I cried in the parking lot with my youngest daughter sitting next to me making sure I went in. I could take the road to right and run OR face my fears of what I had become. It was really hard; I was scared but I went in. I was welcomed there and no one judged me they all understood what had happened to me and they cared. I did this three times a week which is required. Then I found myself going to one every day and three times on Sunday on my own. I also saw a therapist, did some outpatient treatment, A.O.D.A counseling, group therapy for relapse patients on a weekly basis which is required by Drug Court plus community service.

This long term treatment program gave me the tools, resources and recovery support system I needed to stay sober and set me up for a life of sobriety.  Since then I graduated Drug Court, paid off all my fines and paid back all my debts to the community, I got my G.E.D, I’m on the board of directors for the Alano club and still attend AA and NA meetings weekly. I volunteer for Restorative Justice and help with the adolescent A.O.D.A as a volunteer counselor, which brings me here today. The biggest barrier is my criminal record. It prevents me from getting a decent job or a job I really want and I know I would be good at.

The biggest thing that helped me was being treated like I was a PERSON, going to support meetings every week and positive reinforcement. Facing the community after what I had become but not being put down was a big deal for me. In early recovery If anyone would have told me I was a lost cause I would have agreed with them and may never have been here today.  Meth still whispers to me in the night it plays tricks on me and tells me I need it when I’m bored, having a bad day or the scariest is it calls to me when I’m doing just fine. I’m here to tell you this drug is different than all others. I worked painfully hard to get where I am now but I made it and I’m alive because today I choose life over Meth. 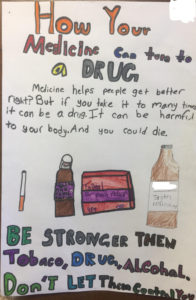 Posted in Articles
Scroll To Top